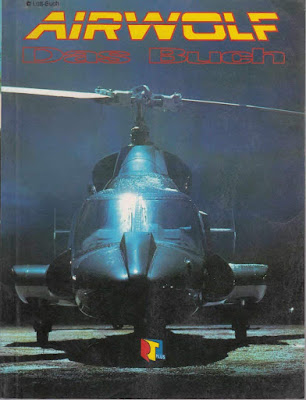 Das Buch is a stunning paperback book from germany featuring 98 pages packed with information and images (34 colour) and (36 black and white) it also features 9 illustrations.

This book endorsed by RTL the german network that first aired airwolf  doesn't cover every episode because during airwolfs first run on german tv some episodes were initially skipped and went direct to video rental.

In turn the book appears to lack information at first glance, but regardless of its 1990 release to coincide with the syndicated re-runs the book makes a great reference guide to RTL's first network run charting airdates and airtimes for the first run in germany. It's just a shame however it has no section dedicated to those that were initially skipped.

It often pops up on eBay for really inflated prices, but can sometimes be found on amazon.de (rather than .com) for far cheaper. I have also seen it many times on Abe Books working out around £10.80 to $12 inc shipping. Abe & Amazon sales are generally just "book stores" eBay sellers sadly are often just snipers & sharks fleecing fans.

I can't read german, but for the amount of images on glossy paper its worth the purchase. Just remember why it lacks information for 14 episodes

The rough mat pages are black and white