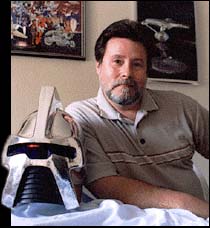 Andrew Probert is mostly known as the guy who designed the Star Trek starship: Enterprise (twice). He still finds himself involved in the Star Trek universe from time to time.

But Andrew has worked on many other projects during his 10 years in Hollywood, including the design of Airwolf! He designed the extra airframe on top of the stock Bell 222, and its weapon system!

To mention some of his other work, we should include Streethawk, Battlestar Galactica, Back to the Future, Splashdance, Disney cartoons, ST: TNG, just to name a few...


1. How did you learn your skill ? When did you get contacted by the Airwolf-crew, and was it because you knew Don Bellisario from Battlestar Galactica ?

I studied industrial design at the Art centre College of Design in Pasadena, Calif. Everything I design is approached as a design problem to be solved as I learned in school. The actual start-date is a little vague after all these years but I think I was put into Airwolf from Universal´s art department, with which I stayed in contact. I only was in contact with Glen Larson, (not Don) when working on B.G. and that was only during the pilot show.

2. Can you tell me about some other "series/movies" you have worked for, and are you still working in Hollywood ?
First of all,...no I´m not working in Hollywood...I´ve escaped. Not from pictures, just Hollywood. I´m always available for design work on a non-union project, especially if it´s in the San Francisco bay area. The other "series/movies" are too many to mention here, but the work I did on them was pretty much the same. That is, usually storyboards, (the illustrator´s stable) pre-production illustrations, and as much design work as I could get away with.

3. Can you sort of describe what you do when you get a job like designing various parts on Airwolf ? How do you start, and do you use computers as well as hand-drawings ?

Hand drawings are always going to be the heart of the designer. Computers are a handy tool when you need to verify it in 3D or maybe modify something, but you must touch your first thoughts.

When I was asked to provide concepts for Airwolf, (and this methodology applies to all projects) I first needed to know just what it was and what it was expected to do. It was a C.I.A. weapon, and its armament needed to be concealed until needed. It was a "Wolf" in sheeps clothing.....which led to my design of its logo. I also designed the show´s title-logo. Anyway, with the chopper needing jet engines, surveillance equipment and a verity of shooting-things, I set about (with my limited understanding of aerodynamics) adding the components onto and into the Bell 222 itself. The studio found a certified shop to make and add the final components to the helicopter. (Unlike another earlier dark blue movie-helicopter) The really nice moment came when David Jones (the primary pilot) jumped out of the Airwolf after its maiden flight, and ran up to Beliisario screaming:, (to be heard over the chopper) "It flies better now than before!" I guess I did something right.

4. Did you contribute in other ways as well on the Airwolf-show ?

Well, besides the graphics mentioned earlier, I designed the flight suits, helmets, the layout of Airwolf´s interior rear compartment, various little things for the Archangel character, and produced some pre-production sketches and a ton of storyboards. I even ended up designing the shooting-crew´s jackets...my first real piece of clothing.

5. Do you have any favourite design ? I would think that the Enterprise from Star Trek is what you are most proud of ?

I have many favourite designs. Most of them, in film, come from the minds of Ron Cobb, Ralph McQuarrie, or Syd Mead. Syd and his real-life design creations are still my biggest inspirations. I enjoy the design work that is in every Braun product, and I still love the Lear jet. My own stuff?.....well, yes, I´m very proud of my "D" Enterprise and I like my long-range shuttle from: ST: tmp too. I´m hoping my best work is yet to be done.

6. On your Airwolf-drawing, we see two rockets on the side of the ADF-pod. Any particular reason for why these were cancelled ? To much of a job to bolt them on, or was it because Airwolf maybe looked "sleeker" without them ?

Those rocket-launchers were designed to hinge out into that firing position. We couldn't actually cut into the body of the helicopter (for structural reasons, everything was bolted on) and the art director made the call to not incorporate them into the miniature, which might indicate that they didn't want to (or couldn't) afford them for the full-size version. The moving items such as the guns and ADF pod were seen moving only on the miniature, then we would cut to the real chopper with the systems already there (or not).

This concluded the Q&A with Andrew Probert

This was the Back Ground Image (on the interview page) 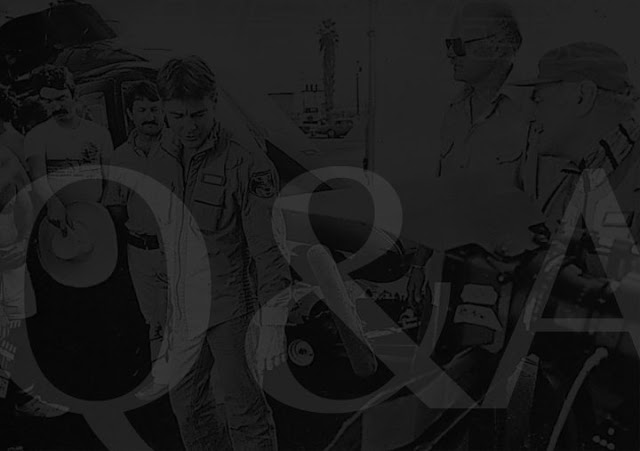