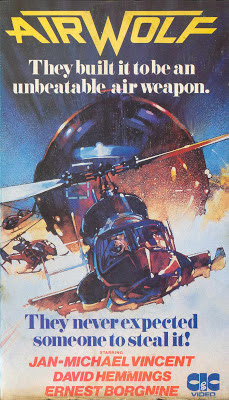 Back of Box:
Airwolf The Movie is a futuristic high action adventure about an awesome billion dollar helicopter equipped with a twin-turbine drum rotor system capable of propelling it to 300 knots, plus 14 firepower options. When the helicopter is purloined by Libyan mercenaries, Michael Archangel (Alex Cord), project director of the CIA, enlists the help of Vietnam veteran Stringfellow Hawke (Jan-Michael Vincent) and his father's best friend Dominic Santini (Ernest Borgnine) in an attempt to recover the Airwolf.
A deadly mission takes them to the Middle East, where they come face to face with the enemy in a dirty battle to re-possess the deadliest aerial weapon ever made.

Special Features:
Trailers for other movies coming out in cinemas
and on rental and out to buy on video previews.


The Movie Version of the Airwolf two part Pilot was released in competition with the Blue Thunder movie release & was never "originally" sold to the public as a Retail item. The only way to watch the movie version was to rent it. It was released later for Retail purchase with a UPC code and different packaging many many years later.

While the much longer two part Pilot aired on television after the 9pm kids in bed deadline (the watershed) on the Friday night, while the series then began the next afternoon. No one really thought about trying to get the movie until the series ended & people realized it wasn't getting a re-run. Also back when it first aired not many people had a VHS machine, let alone a 2nd hand Betamax, that kind of hardware was expensive back then. So not many people even managed to tape the shows off the TV until they were re-aired in 1996 on iTv and HTv Wales.

The movie is rated 18+ and contains swearing, it also featured a few extra scenes padding out the action and yet it was also cut in places removing the pilot ending at the cabin, so when Airwolf fly's over the water at after hunting Moffet, it ends right there. The TV pilot edition shows hawke back at the cabin with a visit from archangel leaving him with a case for the series to begin, the TV pilot also shows them checking out the lair, these scenes aren't on the movie release.

The Redstar start up sequence also features a different music score in the Movie Cut as does the red castle scene when Angela is dancing at the red castle. The movie is shorter than the pilot though it does feature a chad training camp scene that moffet takes out. The chad camp scene is made up of clips from "and they are us" and also "mad over miami", but the movie release can be watched as a stand alone film that ends where it ends.
Airwolf  "The Movie " version is now also available on DVD  . 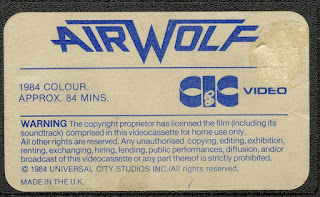 
Here is the original VHS Movie Trailer for the '18 cert' Airwolf Movie.


People may post comments below with any additional information....