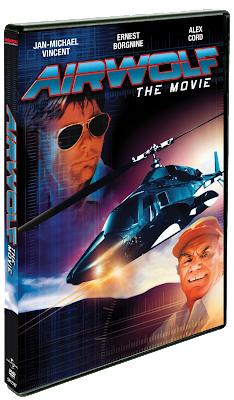 Back of Box:
Airwolf The Movie is a futuristic high action adventure about an awesome billion dollar helicopter equipped with a twin-turbine drum rotor system capable of propelling it to 300 knots, plus 14 firepower options. When the helicopter is purloined by Libyan mercenaries, Michael Archangel (Alex Cord), project director of the CIA, enlists the help of Vietnam veteran Stringfellow Hawke (Jan-Michael Vincent) and his father's best friend Dominic Santini (Ernest Borgnine) in an attempt to recover the Airwolf.
A deadly mission takes them to the Middle East, where they come face to face with the enemy in a dirty battle to repossess the deadliest aerial weapon ever made.

Fans petitioned Universal Studios for a long time to get the Series released in full on DVD, oddly the movie came out much later. Most fans who managed to already get the movie either had the VHS Public Release or the VHS Video Rental release for the lucky few who could find it back when video rental stores sold it on along with Airwolf II and Airwolf III (which were both just double episode tapes in no specific order)
And also the Columbia House Collection which was a form of "collect one a month" from a Video & later DVD publishing house, although im unsure if they officially released the movie version, as ive yet to see a Columbia House dvd or vhs cover for "the movie" that didn't look doctored in a image editor.

People may post comments below with any additional information....

Review by TheWraith517
Menu Graphics Provided by...  NO ONE YET ??