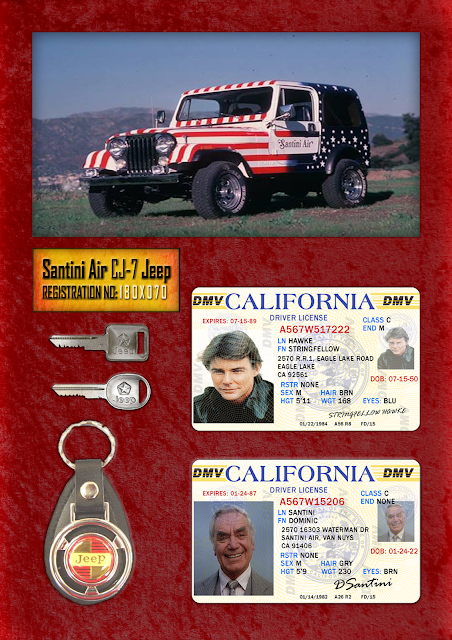 When i make something airwolf related its often pretty unusual, and never seen before. Its also most often a really simple concept that can be used as is OR expanded upon by the fans.

So here we have another classic bit of fan made fun anyone can get printed off and put it in a frame.

Jeep Keys, Key Ring and Licenses on a custom velvet looking backing texture designed in  A4 size and would be best suited to A4 Glossy Photo Paper to give the keys and the licenses that glossy silver and laminated effect.

That glossy paper effect should look even better behind the glass or perspex in the frame.

The keys used here where a photo (from eBay) of Blank Uncut jeep keys for sale, they were given an outer bevel to give them depth and were cut in photoshop. The keyring was also a photo, given a bevel and a shadow to emphasise it being thicker than what it looked. None of what you see is a Hard Copy, even the licenses are made in photoshop, what your looking at is all digital creation.


You can buy JEEP and the AMOS branded OEM Keys off ebay, you can design a backing texture OR use real cloth. You can Print and Laminate the licenses i made for String and for Dominic, buy a key ring. You could actually create all this physically in a frame for a few pound so it visually looks more realistic up close (though clearly heavier to hang)

The perfect Christmas or Birthday gift printed and framed or created with real peices and framed.

You'd pay $45 for this on eBay if the image here had a WATERMARK.. So leave a comment or some sh*t in appreciation for the artists time or like it on facebook and SHARE IT...

BE WARNED..... LURKING & LEECHING KILLS CREATIVITY..
i don't use price tags, i never have.. consider that..... log into google.. leave a comment below
INSPIRE....